People say that it’s good luck to give wood for the fifth anniversary. I’m not sure why, but I think it’s probably got something to do with the adding of experiential rings; growing together, evolving. The roots that flourish bring life to more and more buds, each new year that you are together.

June 09h.  Our wedding day was sunny and bright; the crowds, looking ravishing, gathered outside the church. The wedding planner had a hard time shuffling the latecomers into the Basilica, which was fine because the organist  – which my father insisted upon – was late. When the church doors swung open and I saw all the people, i swallowed hard. Dad walked me down that long, cathedral aisle; Mitchell met us half way. I beamed through Forever Young.

I never would have guessed that Mitchell and I would be in China together for our fifth anniversary.  Not unheard of, but not predicted either. We left at six am to hike the Great Wall of China, Leila and Mitchell’s Canadian colleague, Jennifer, in tow. The day was spent meandering through centuries gone by at this astonishing feat.

Things probably remained philosophical until our driver got us lost in the Chinese countryside on the way home ~ at which point we arrived at a second destination quite unexpectedly (Ming Tombs – the resting place of 13 Ming dynasty emperors!) . This further delve into Chinese burial traditions brought us back around to our sightseer’s center, while a hot little five year old whined politely for ice cream until we’d seen the tombs.

It was upon our return to Beijing that Mitchell told me he had an (early) anniversary surprise for me, and that Leila and Jennifer had an evening of fun girl time planned. Both girls were thrilled, Leila especially, citing that she was growing weary of her travelin’ hostel room mum. I concurred.

We had discovered this trendy little area in Beijing – with small cobbled hutongs, tea shops, restaurants, and little stores with homemade stuff. Hugely popular with locals and tourists alike, the houhai district is home to a quaint little lake, lit up at night by beautiful lanterns. Although I’d been in Beijing for almost two weeks, I’d barely seen any foreigners, minus a few gawkers at the big sights. That can be summer up in the two words which i had been seriously lacking since my arrival in Beijing: Night Life.

The lake was a magical backdrop for us to have our passionate five year where are we now discussions, including one eventful moment where we wondered what we would say if we could have written a letter to ourselves ten years ago. I’m going to mull this over and hopefully post it when i come up with something brilliant. For now: Dear 22 year old Mo, don’t worry about it.

Before Mitchy went back to his teaching post in Xuchang, (which most of the CHinese people I ask never ever heard about), we left me with a gift. The morning he left, he opened his suit case and took out some round, fat, black prayer beads. They matched a longer string of smaller beads that he had wrapped around his wrist three times. “Want some beads?”

I smiled. Something wood. 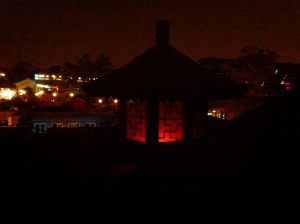